Programming and driving the future car

Konstanz, July 2015. Interested students from schools coming from the greater Lake Constance area were visiting the HTWG. The activity of each group was the design of a connection for a remote car control and the programming of the car's behavior. Based on a toy car model, Daniel Scherz prepared the exercise. Together with other advanced students (Oana-Ramona Velicu, Hannes Kleiner and Björn Tribensky), the lab has been designed and prepared for the incoming students. The students started to prepare a Bluetooth connection and then they setup the program for receiving and processing the signal from the remote control. Only the hardware component cabling had been prepared before this session. 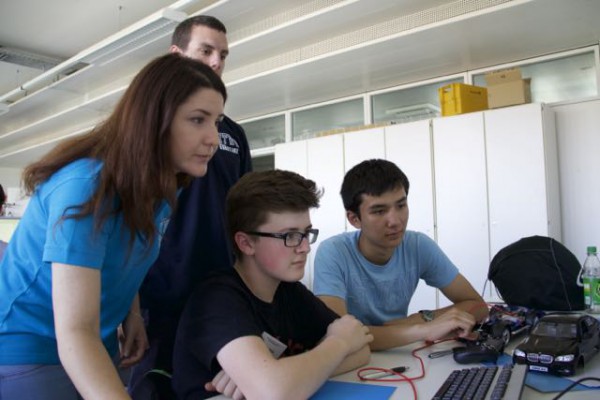 At the beginning, a common toy car had been bought and all electronic equipment was removed. There were only two exceptions: the motor for the traction and the other one for the steering direction could remain. Only two new elements have been implanted: the microcontroller and the level shifter required to connect the power for the motors. The Intel Edison has been selected as the microcontroller. 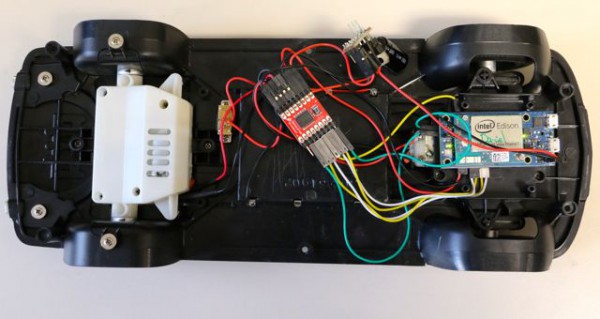 Besides the fact that it can be programmed quite quickly, it has Bluetooth and WiFi on board. The Bluetooth connection has been used for the remote control. The remote control is based on a regular PlaySation controller. This controller provides Bluetooth connectivity and therefore, only the pairing between the controller and the Intel Edison need to be implemented. The concrete pairing of the devices is the same like it is known from others (e.g. the pairing of a smartphone and a hands-free car communication equipment). In a further step, the students had to map the PlayStation buttons to the Intel Edison controller in order to emit the right command to the motors, in case you press a button on the PlayStation controller. For example, pressing button Y to drive forward etc. The programming of the controller code was done on the laboratory PC and then downloaded to the Intel Edison. After the download, the result can be tested. The students implemented several exercise before they started to design their own code and an individual tuning of the car’s behavior. Finally, at the end of the day, all cars participated in a competition.

The main architecture of the system is described here:

The first elegant curves when parking a car:

Here is the final competition of the first day.

Here are some more impressions from the Summer Camp days.