Ancona, 31 October 2014. These days the computer analysis of ECG (Electrocardiograms) signals is common. There are many a real-time QRS recognition algorithms. One of these algorithms is Pan-Tompkins Algorithm, where it is working to detect QRS complexes of ECG signals. The algorithm will analysis the data stream of the heartbeat based upon the digital analysis of amplitude, bandwidth, and slope. In addition to Mohammed Rajab proposes a new algorithm has to compare whether the current heartbeat is similar or different to the last heartbeat after detecting the ECG signals. So the algorithm will determine the stress and stress detection for the patient in real-time. In order to implement it, the algorithm is modeled in C language using different function as beat detector and beat classifier of stress. His results show that it can be used for correlation detection between stress and the heartbeat. 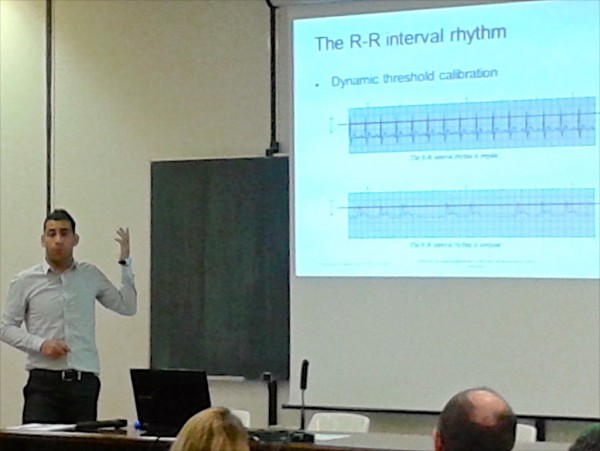 The idea of the algorithm is to use the QRS complex detection algorithm result to determine an R-to-R interval classification and to estimate the width for each beat. According to the basic detection rules, the peak will determine whether it is larger than a detection threshold and i.e. it is a QRS complex; otherwise, it is called ‘noise’. If an interval is equal to 1.5 times the average of an R to R interval, it is counted as a peak, in case it is larger than half of the detection threshold, and the peak pursued the preceding detection by at least 360 ms. Then the peak is classified as a QRS complex. Depending on these two detection rules, it can estimate the QRS peak and noise peak. Also from the R-to-R interval it can calculate the mean of the last eight R-to-R intervals.